On 23 November 2016, the 25 Member Countries of the UEHJ Elected Their Executive Committee at their Constitutive General Assembly 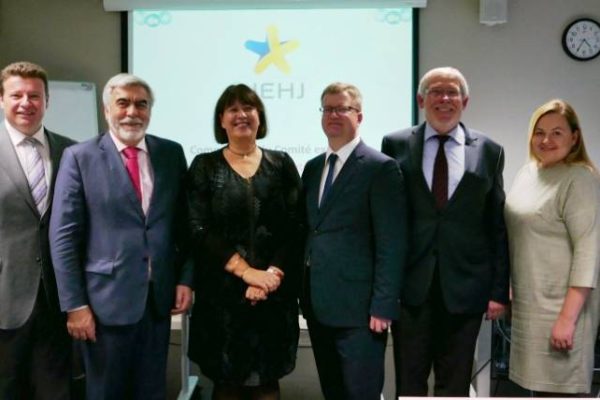 Since its creation in 1952, the UIHJ represents all the judicial officers in the world. Numerous actions have been carried out with institutions and international organisations, first on the European continent and then on the American, African and Asian continents.

Concerning the representation of the profession before the European Union, the UIHJ is in direct contact with the European Commission, the European Parliament and the Council. At the Permanent Council of the UIHJ of November 2011, member countries of the UIHJ decided to create an internal organisation more specifically responsible for representing them before the institutions of the European Union. This decision was guided by the desire to maintain a full interconnection in the actions carried out by the UIHJ.

While the establishment of the European Union of Judicial Officers (UEHJ) has been postponed several times, countries have continued to demonstrate their willingness to carry out this project. This is how the UEHJ was created on 14 July 2016. The UEHJ is an international association under Belgian law. Its headquarters are in Brussels (Belgium). In accordance with the wishes of the members of the UIHJ, the UEHJ is an internal organisation to the UIHJ.

The president and the treasurer of the UIHJ are statutorily president and treasurer of the UEHJ. During the general assembly, the members of the UEHJ elected the other members of its Executive Committee. The Executive Committee of the UIHJ consists of:
President: Françoise Andrieux (France)
Vice-President: José Carlos Resende (Portugal)
Treasurer: Juraj Podkonicky (Czech Republic)
Secretary: Janek Pool (Estonia)
Members: Walter Gietmann (Germany), Dimitris Tsistonis (Greece) and Zsolt Orell (Hungary)
The Executive Committee is also assisted by the Secretary-General: Dovile Satkauskiene (Lithuania).

The UEHJ is in charge of taking over from the UIHJ in the continuation of its work concerning the European Union, in particular the Stobra projects, and any action to promote and ensure the defence, development and future of the profession of judicial officer in the European Union.

It is clear that with 25 countries, the UEHJ now officially represents the judicial officers of the European Union.

Let us wish long life and full success to this new entity, for the benefit of all the judicial officers of the European Union, and those of the rest of the world who will profit directly from its developments.

Brexit: no accession of the United Kingdom to the Lugano Convention